<rant>
Gah I HATE drama. Why can't people keep their personal feelings to themselves?! and let things be.
And I dislike it when people don't keep their word, sure it's minor, but it becomes more and more annoying as they continue to break small promises. One of the reasons I try to never commit to a specific action or date ahead of time is that once I give my word I'm going to feel committed to hold to it, regardless of how difficult, expensive, or inconvenient it may later become to do what I said, I'll still do it. I consistently rely on what others say they will do, as if they really will do what they have said, and am consistently disappointed, no, not _every_ thing, but enough that it becomes annoying. Why can't they at least let me know ahead of time if they're not going to do as they say?! So I don't count on it and fail to make other plans.
And why don't people be specific and clear about things! If there is something they want done, don't just assume I know what the hell they are thinking! spell it out! be as specific as possible. Ok I'm guilty of the last as well, but when I try to get the specifics out of people they tend to think I'm being deliberately obtuse when it's the exact opposite I'm trying to accomplish!
Gah!
</end rant>
Posted by the Ghost of Charles Lutwidge at Saturday, May 19, 2007 No comments: Links to this post

The Drinky Crow Show is up!

Go watch now!
Posted by the Ghost of Charles Lutwidge at Friday, May 11, 2007 No comments: Links to this post

http://www.booktv.org/feature/index.asp?segid=8171&schedID=485
Posted by the Ghost of Charles Lutwidge at Friday, May 04, 2007 No comments: Links to this post 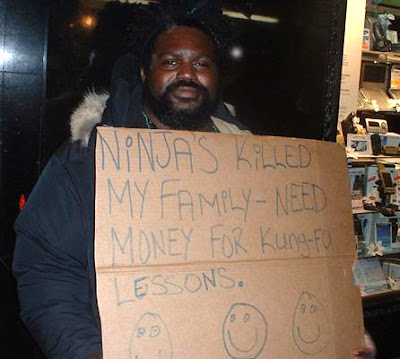 It's the smiley faces that really give it the extra weirdness.
Posted by the Ghost of Charles Lutwidge at Thursday, May 03, 2007 No comments: Links to this post

Using a new format (oral history), Palahniuk�s novel visits the family, friends, and enemies of the dead serial killer Buster Casey.  As they try to make sense of the void left by his passing, his life is examined in full, unveiling the truly macabre and often contradictory details of a horrific path of death and destruction.  A truly dark masterpiece as only Palahniuk himself could write!  (Please note that this event was moved to Vroman�s Main Store from its original location at CalTech�s Beckman Auditorium.  The time was also changed from its original time of 8 p.m. to 6:30 p.m.)

Event Guidelines are as follows:

~ Numbered line tickets will be handed out beginning at 9 a.m. that morning.  (Customers who do not buy their book from Vroman�s will be attached to the end of the ticketed line.)

~ Chuck will sign copies of Rant along with 3 backlist titles brought from home.

~ He will personalize books.

~ There will be NO POSED PHOTOS allowed, however photos from the line are ok.

Posted by the Ghost of Charles Lutwidge at Wednesday, May 02, 2007 No comments: Links to this post